From standards to technology, a detailed explanation of what goes into a headset

Are you wearing a headset right now?
If we were to give a group to the phone and its accessories, the C-position next to the phone would have to go to the headset. Whether it was the plague of wires in the past, or the subsequent trolling of the Bluetooth headset experience, it didn’t shake the C-position of the headset students.
Nowadays, the price of split Bluetooth headsets is becoming more and more affordable, and the standard equipment for smartphones is becoming more and more inclined towards Bluetooth headsets, even the experience that had been trolled countless times in the recent wave of big upgrades.
However, as the basic experience approaches perfection, the need for wireless Bluetooth sound quality has to be on the agenda. With the wired market still dominated, it remains to be seen whether wireless can meet consumer demand for higher sound quality. 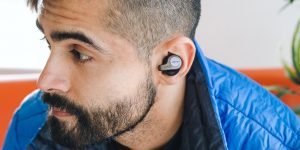 1/4 The non-Apple split headset experience is vastly improved
As far as split Bluetooth headphones are concerned, many consumers are well aware that Apple’s AirPods have a huge advantage, both in the Android camp and from third-party headphone manufacturers.
Latency and ease of pairing aside, the fact that the left and right side of the headphones can play simultaneously puts AirPods ahead of other brands in terms of experience.However, the Android camp is seeing a gradual change in the shortcomings of the split Bluetooth headset in terms of experience.
Qualcomm introduced enhanced features for TrueWireless Stereo technology in February 2018. The additional mode of the technology, TrueWireless Stereo Plus, enables the so-called true wireless feature, which, when combined with the Snapdragon 845 mobile platform, allows simultaneous connection of the mobile device and the two earbuds, no longer limiting the split Bluetooth headset to a primary and a secondary, avoiding the problems of out-of-sync sound and image in the left and right ear and excessive power consumption in one of the headphones.

The QCC5100 SoC running this update to TrueWireless stereo technology has been available to the public since September 2018, and already in March this year, a Nordic manufacturer launched a split Bluetooth headset with this chip.
On the other hand, in addition to chip manufacturers, headphone manufacturers are also starting to address the issue of left and right headphones being out of sync.
Sony announced the use of a newly developed Bluetooth chip in its WF-1000XM3 product released at the beginning of July, which enables the simultaneous transmission of sound signals to the left and right headphone units, while also reducing latency.

Clearly, this also leaves behind the ties to the Snapdragon mobile platform on the front end compared to Qualcomm’s TrueWireless Stereo Plus technology.
And from consumer feedback so far, this product has even better low latency performance when used with iOS models than on its own Sony mobile products.
Recently, Google also said through its official blog that it will improve the Android support experience for Bluetooth headsets, specifically saying that for TrueWireless Stereo technology headsets will be able to support fast pairing and display the power level of the headset and headset charging case.

Google also supports quick pairing of devices to be viewed in the Find My Device app, showing more details in the device and providing the Android camp with more features about Bluetooth headsets in addition to OEM apps.

2/4 Mobile phone wired sound quality enhancements continue to grow
Although many phones have now removed the 3.5mm headphone jack, along with the DAC and headphone amplifier. However, many mobile phone manufacturers have not compromised the sound quality of their phones as a result.
For example, Apple has built a Cirrus Logic 46L06-CWZR chip into its 3.5mm adapter from the outset, allowing the phone to achieve the same sound quality as before.
Huawei and Meizu have done a more sincere job with this adapter.
The CM21 digital earphone, which was unveiled at the same time as the Huawei Mate 10 series launch, has a special appearance that incorporates many of the volume adjustment knobs that come standard with HiFi players, and even a special built-in Cirrus Logic CS43130 DAC decoder chip.

It is no coincidence that Meizu has also launched HiFi decoding earphones with built-in Cirrus Logic CS43131 DAC decoder chip, which can support decoding and playback of 2.8GHz and 5.6GHz DSD audio.
However, there are problems with the compatibility of these products with different brands of terminals, which is one of the reasons why they have failed to gain mass popularity.
At present, domestic third-party manufacturers also see the HiFi business opportunities on mobile phone headset adapters, and many products that also have built-in higher-end independent DAC decoder chips have also gained good sales.
There are even products that support 2.5mm balanced output on adapters.
In addition to the use of Type-C connectors, mobile phone manufacturers have come up with another way to enhance their selling points by offering higher-end earphone products to improve sound quality.
Recently, it was announced that Samsung is preparing to equip its flagship Galaxy Note 10 with a Type-C headset with active noise cancellation as standard in the second half of the year, which could indirectly make up for the fact that the 3.5mm port will be removed from the Note 10 again.
Previously, Sony’s phones were able to achieve active noise cancellation by pairing them with their own headphones, without the need for a separate power supply battery.
With the return of the 3.5mm port on some phones this year, manufacturers have seen that products can bring more selling points in terms of sound quality.
Qualcomm launched its Qualcomm WCD937x series of audio codecs for smartphones, the WCD9370 and WCD9375, in June this year, officially stating that “Golden Ear” certified people were hired to guide the product development process for audio optimisation.
A “golden ear” is a term used to describe someone who is able to identify and differentiate between the most subtle musical distortions, the characteristics of different digital filters, reverberation, colouring, panning and harmonics.
It is reported that the Qualcomm Aqstic WCD937x series will be widely used in smartphones equipped with the Snapdragon 730/730G mobile platform, which means that Xiaomi, Lenovo, Samsung, OPPO and other subsequent models are all expected to receive an improvement in front-end sound quality.
In addition, the integration between mobile phone manufacturers and traditional headphone manufacturers has become even closer.
Apple bought Beats Music and Beats Electronics for US$3 billion back in 2014, and today Beats’ Bluetooth headphones are a great companion to Apple’s phones, acting as its own family to support Apple’s efforts to remove the 3.5mm port and promote Bluetooth headphones at the accessory level.
Samsung, on the other hand, bought Harman International, the parent company of AKG and JBL, for US$8 billion in 2016. AKG headphones are now also standard on Samsung phones, while AKG helped Samsung participate in the tuning on the Galaxy Buds product, and even followed up with a docket by arguing that the product fits the Harman curve.
There are rumours that the noise-cancelling headphones that Samsung is expected to fit as standard on the Galaxy Note 10, mentioned above, also have a relationship with AKG.

3/4 Wireless audio upgrade is in demand, wired is on hold
From the current situation, chip makers, accessory makers and mobile phone manufacturers are getting deeper and deeper into support for true wireless headphones, which are currently in demand by consumers.

As evidenced by the 2018 statistics, many consumers are already embracing the wireless way of listening to audio and are also demanding more of it.
52% of respondents said they are using left and right separated headphones, 78% have embraced voice UI, while 79% expect high resolution audio and 76% consider sound quality to be the most important feature of an audio product.
In the Bluetooth Alliance’s Bluetooth Market Update 2019, it was also stated that Bluetooth headsets, the first wireless audio devices to be introduced, have gone from padded headphones to truly wireless earbuds, and are now a must-have accessory for mobile phones.
The immediate need for wireless audio enhancements is being addressed by the industry chain through the ever-improving Bluetooth transmission protocol.
In addition to Qualcomm’s aptX and aptX HD, Apple’s AAC and Sony’s LDAC, more new codecs are beginning to emerge.
For example, Qualcomm’s aptX Adaptive, released in 2018, is equivalent to the integration of the advantages of the original aptX HD and aptX Low Latency, which provides CD-quality sound on the one hand, and ensures low latency during gaming, interaction and audio-visual processes on the other.

In the same year Huawei also standardised on its own phones with the HWA high quality Bluetooth protocol, HWA for HiRes Wireless Audio, based on the LHDC coding protocol, which also gives this technology developed by SAVITECH a new option for Android phones in terms of Bluetooth transmission protocols.
Clearly, whether it is the issue of latency, left and right ear synchronisation, or sound quality, the improvement of mobile phones in terms of wireless audio capability is accelerating and the consumer experience is gaining momentum.
On the other hand, for the wired audio capability of mobile phones, once the basic needs of users are met, subsequent further enhancements will instead not present too much of a commercial opportunity.
A good example of this is the DP-CMX1 launched by Japan’s Anbridge in 2017, which, as a HiFi player manufacturer, provides a 3.5mm interface for mobile phones while also incorporating a rare 2.5mm balanced interface with balanced output.

Also, two ES9018C2M DAC chips and two SABRE 9601K amplification chips are built in. However, the product was not launched as a successor model and sales were lukewarm, becoming only an extremely niche HiFi phone product.
Interestingly, HiFi players are now beginning to benefit more and more from the development of the mobile phone industry. The inclusion of capacitive screens, the use of mobile SoCs, Android-based interfaces and support for installing streaming apps have all introduced smartphone habits to the traditional HiFi player.

Conclusion / 4
Perhaps the concept of the music phone will make a comeback when mobile phone manufacturers are once again at an impasse in their competition for screens and cameras.
After all, as humans evolved from tree-hugging apes, we have developed eyes that are sensitive to colour, and the vibrant colours on our screens evoke a sense of excitement about fruit.
And if our ancestors had been dogs and cats, we would have been more interested in the sound quality of our phones than in colourful screens. So, a high-end HiFi music phone must be a secondary demand.